Eugene and I connected on LinkedIn about a year back.

Back then his profile was showing that he is in stealth mode of his HR Tech startup.

That was during the peak of the crypto BS and naturally, I thought it is going to be another blockchain idea that the world doesn’t need.

The unfolding came around their seed funding round announcement where they raised $1M.

It is an impressive achievement given how quickly they achieved this vis-a-vis the precedence.

I believe it boils down to the pain they are trying to solve being much bigger.

Roster scheduling for businesses that require them is something that directly affects a business turnover for that day.

I speak with Eugene to learn more about his motivation in starting StaffAny and how exactly it helps the businesses they are targeting.

What did you do before co-founding StaffAny?

Before StaffAny, I was an enthusiastic university student studying in NUS business school, and my major is in Finance.

During my time at University, I tried to start-up three times!

Fortunately, unfortunately, 2 of my startups didn’t work out while another, Exchangebuddy, has become an information site that provides information for exchange students.

On top of starting up, I went on a year-long NUS overseas colleges (NOC) to Shanghai, where I interned as business development and online marketing role at an HR tech company.

What motivated you to start StaffAny?

The impact of the problem we’re solving!

The opportunity stemmed from one of my co-founders, Janson Seah, who used to run a bar himself.

Furthermore, it’s a problem not only faced by the F&B industry and affects almost all of our favourite brick and mortar stores.

My co-founders Janson Seah, Jeremy Hon and Kaiyi Lee started validating the idea when they were in the Bay area in late 2017. Upon graduation, we decided to co-found StaffAny, and alongside the founding team is Jiayi who leads design.

How exactly does StaffAny work?

At StaffAny, we help many of our favourite brick-and-mortar stores, optimise their scheduling and HR administration through our integrated scheduling and time tracking mobile and web application. 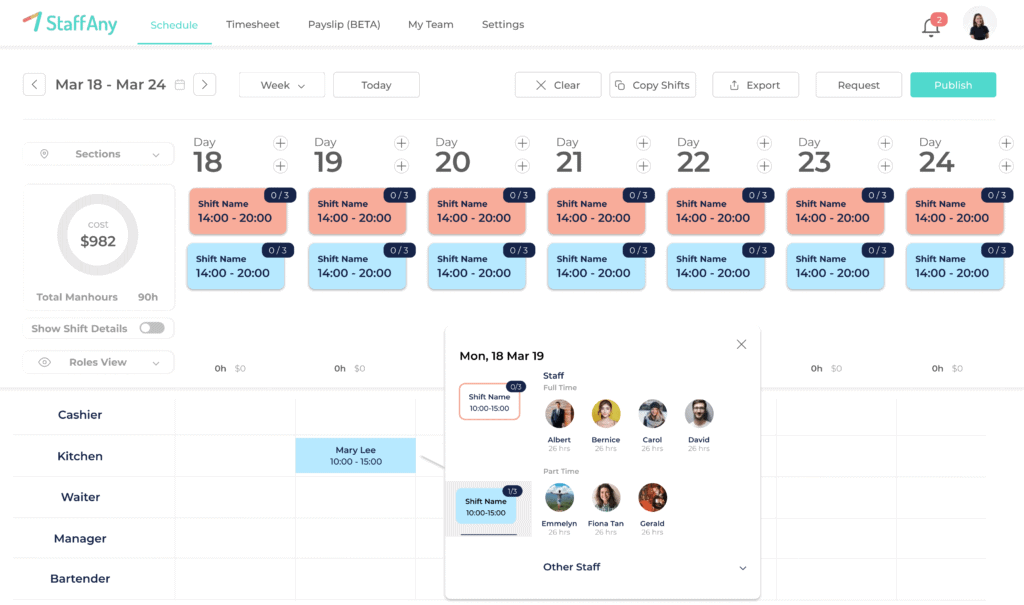 Our job today is to connect the HR and Operations department internally within organisations.

With StaffAny, businesses can better performances, cut operating costs, and make time to do what matters to them the most.

We raised a seed round of investment totalling S$1 million, which will be used to support our growth and expansion plans.

This seed investment was led by FreakOut Holdings, Inc. and several angel investors.

Our closest competitors would be the current manual process that most brick and mortar stalls are using!

That would be your excel and punchcards/biometrics.

Other competitors would include legacy software, but the world is changing, and their interface is no longer favourable to current users.

Who would be your biggest customers currently?

Our biggest customer is Royal Tea Group (Liho). Before using StaffAny, they were using an HRMS solution to handle their payroll and Timesheet Management System (TMS).

They decided to go with us because the scheduling tool is not flexible.

Furthermore, they faced clock in issues, inaccurate timeclock records, and do not have operational visibility.

All of these led to major headache on an HQ level.

Being operational focused with an integrated scheduling & TMS tool, StaffAny can capture accurate operational data which they can feed into their payroll solution.

Marketing a new business can be extremely challenging. What has worked well for you?

We always stay close to our customers, and we’ve been receiving an increasing number of referrals and account expansion 🙂

What is your proudest moment in the history of StaffAny?

That would be getting our first ten paying customers.

It was not easy getting the first ten customers without much credibility at the start. 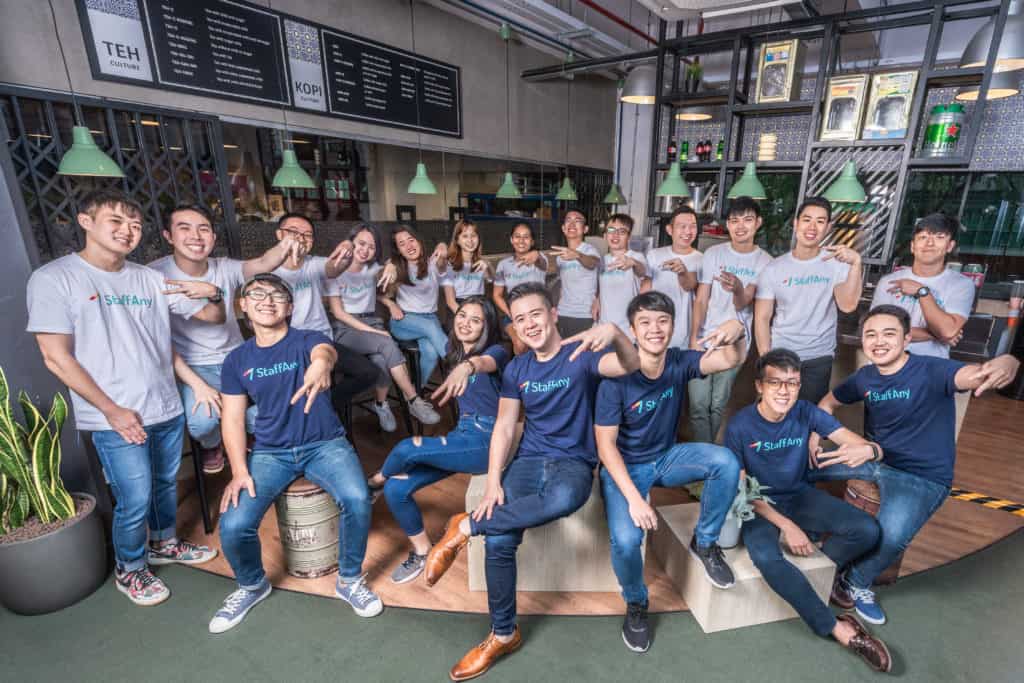 I remember that I would spend 8 hours a day knocking on doors along concentrated F&B streets with hopes that the owner will be around for me to share about StaffAny.

Failures were aplenty, but failure is not a failure when we learn what to avoid and not repeat the same mistake.

One apparent failure that I experienced was a failure to respond to a vital customer inquiry that led to dissatisfaction (This was in the very early days).

It made me reflect on how I would better manage the situation and the purpose of doing StaffAny.

What we want to do is to help our customer achieve success and reduce their work.

Hence, I learned that being responsive is a crucial element to help our customers achieve success, and at StaffAny, our customers are at the core of our business.

Do you have anyone that is a major professional influence?

I love reading on growth and scaling and would read books written by startup founders who have “been there done that”.

I like growth opinions by Neil Patel or Andrew Chen and would read up on growth articles every day.

Most people mention about Steve Jobs, Jack Ma or Jeff Bezos, but this time around, I would like to share a different choice.

If I had to make a choice, I would choose Naruto!

Although I’m not an anime or manga fanatic, I like the attitude of Naruto portrayed in the story.

The story was about a young man who has a dream to be the village leader, but he was the least talented, looked down and was cursed.

Despite his circumstances, he faced every obstacle with determination and eventually gather the respect of his peers and achieved his dreams.

I read this story when I was younger, and it has taught me the importance of being genuine, having humility and grit.

In the past, my perception of growth was less measurable and technical but more “Bashing”.

Meaning to say it’s more “try now think later”. After reading the book, it gave me a new perspective on the importance of measurement and using data to make decisions.

2. Makings of a manager

It teaches me that running a team is not just about achieving and completing targets; it’s about building the group as a whole and as individuals.

In the last 12 months, what new belief, behaviour, or habit has most improved your life?

I love this perspective of growing and the attitude to be a better person of myself every day.

It allowed me to view situations with a new lens, and there is something to be learned in every case or circumstance.

I’m not the best at being good with details.

Hence I got amazing co-founders, Janson, Jeremy and Kaiyi to help me with this.

I would come up with three major tasks to do the night before.

Before I head to bed, I’ll pen down three tasks to be completed the next day and would only rest until I complete them.

[callout]To learn more about StaffAny, visit www.staffany.com or you can drop Eugene an email at [email protected][/callout]