I first got to know about Adaface at this year’s HR Tech Summit in Singapore.

Adaface is one of the four startups pitching at the Tech Den and I did some research into every one of them.

Initially, I thought they are just another coding assessment vendor competing in a crowded space.

But their idea is a little different – they combine coding assessment with a conversational chatbot.

It may not seem like a significant change but this move dramatically improved the user experience of the job seeker.

You can go from clearing the coding assessment to answering questions such as notice period, salary expectation, etc.

This reduces turnaround time as it eliminates an administrator to step in to move things forward.

I speak with one of Adaface co-founder Deepti Chopra to learn more.

What did you do before co-founding Adaface?

Before Adaface, I’ve been a product manager/ software engineer.

I studied electrical engineering at IIT, during which I also spent time researching ML algorithms for earthquake early warning systems at Caltech.

Started my first startup right after undergrad and made all the rookie mistakes in the book.

It was about applying predictive analytics/ machine learning on top of millions of social profiles curated from across the web to find the most relevant candidates for a job opening.

At the same time, enabling startups/recruiters to reach out with a personalized pitch via social cues.

Obviously, that didn’t go very far but because I wanted it so bad, I taught myself how to code/ build a product.

Once that bombed, I spent two months waiting tables at Pizza Hut just because I was curious as to what that would be like.

Most recently, before starting Adaface, I was doing product/ tech at a very early stage startup as engineer #2.

We were building a way for companies to train and upskill blue-collar workers via an engaging AI built on top of WhatsApp.

This is being used by some of the largest companies in the world- Uber, Domino’s, Flipkart etc.

What motivated you to start Adaface?

The idea for Adaface came from our experience of having been on both sides of the hiring spectrum- initially having interviewed with multiple companies.

And more recently having interviewed and hired engineers and teams for several companies.

Sending a test with trick questions is not a healthy way to start a conversation with a candidate.

We build a conversational chatbot, Ada to enable companies to automate first-round tech interviews and understand if there is a mutual fit.

This allows a positive interview experience that leaves candidates with a smile and gives companies the ability to screen thousands of candidates within days.

It also helped that my previous startup was also in the HRTech space.

Somehow HR Tech is something I always gravitated towards.

People spend a major chunk of their life at work.

Their happiness/ satisfaction at work determines their quality of life to a very high extent.

Even though it may seem like a “boring” space, the impact is tremendous.

It is extremely satisfying to know that we helped so many amazing software engineers find jobs where they can maximise their potential and became great hires for companies.

How exactly does Adaface work?

Ada can engage candidates and screen them for tech skills required for the role.

This enables companies to hire more effectively by reducing screening time by 90% and spending more time engaging the shortlisted candidates.

Top candidates prefer Adaface because our bot, Ada engages with a friendly chat involving relevant code challenges as opposed to asking trick questions on a test.

Here’s what we’re doing differently from the status quo:

We’re funded by Entrepreneur First, which is the world’s leading talent investor.

Entrepreneur First is backed by Reid Hoffman (founder of LinkedIn), the founders of DeepMind and PayPal, SGInnovate (Singapore Government’s arm to invest in deep tech companies that tackle difficult challenges) and some of the top investors in the world.

Post that round, we’ve been a bootstrapped company, which is something we’re very proud of. 🙂

The popular coding test platforms would be our closest competitors.

Some of them are HackerRank, HackerEarth, Codility etc.

Marketing a new business can be extremely challenging. What has worked well for you?

At this moment, we are seeing the most success with SEO.

Initially, SEO was only one of the few channels we were exploring and quite frankly we didn’t expect it to work since we are a brand new product in a very crowded market.

But metrics show that most of our new customers are finding us online as a result of our SEO efforts.

For a product like ours, customers do a lot of research online about the product, read reviews, compare with competitors before making a decision.

Once they spend time comparing all the different ways to automate screening interviews, our unique stance on moving away from trick questions and the focus on candidate experience stands out.

You can read more about it here:https://www.adaface.com/about-us

Going forward, we see that as a major acquisition channel as well.

What is your proudest moment in the history of Adaface?

There have been a few, firsts are always special.

The first sale we made, the first hire that one of our customers made using the platform, the first annual contract that a company signed. 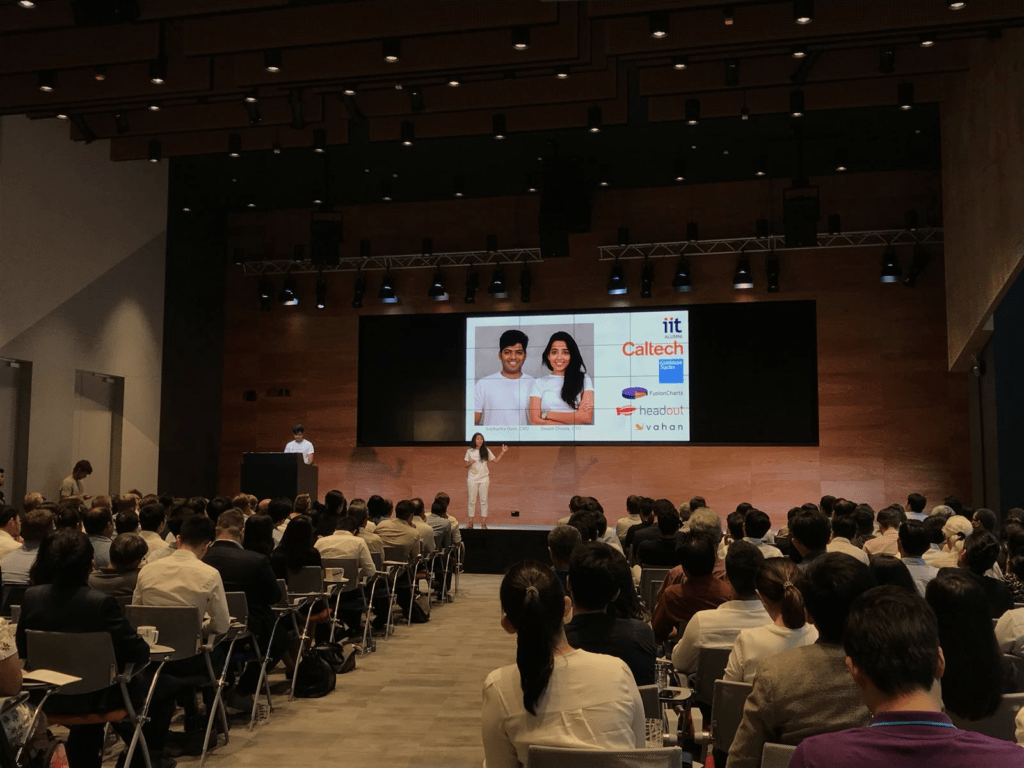 One of the things we take the most pride in is the feedback we receive from candidates.

We’re still in the early stages, and there are things we could be doing better in terms of the UX.

But despite that when candidates see the underlying intention of what we’re trying to do and let us know that they really enjoyed the interview chat with Ada, that is very special.

Those are the little things that we’re proud of and keep us going.

We have set up a Slack integration and have a dedicated channel to broadcast the feedback left by every single candidate.

Reading the reviews left by candidates as they flow in brightens our day, and also brings to our notice any suggestions they make.

This is something I recommend other early-stage startups also try.

When I first started up as a 21-year-old, right after undergrad, I was making all of the noob mistakes.

I didn’t have a full-time co-founder and focused too much on the tech but not enough on the product.

Sales efforts were almost zero and we were giving out a B2B product for free hoping companies would eventually pay (which they never).

When I decided to move on from that, I felt like a quitter.

There was obviously a huge opportunity cost to it and it is still debatable whether that was a good use of time, but looking back I can see how those experiences affect a lot of the decisions we make at Adaface.

Finding the right co-founder is probably the most important part of starting a company and I am extremely grateful for having found a co-founder who is just as committed to making this happen, and who’s a close friend as well.

We’re very focused on building a product that is 10x better than the status quo, and now companies are beginning to take notice.

It also helps that we have paying customers from Day 1 before we had a product!

Do you have anyone that is a major influence professionally?

I never really had a role model per se but what I like to do is pick up little things from people around me and people I follow online. 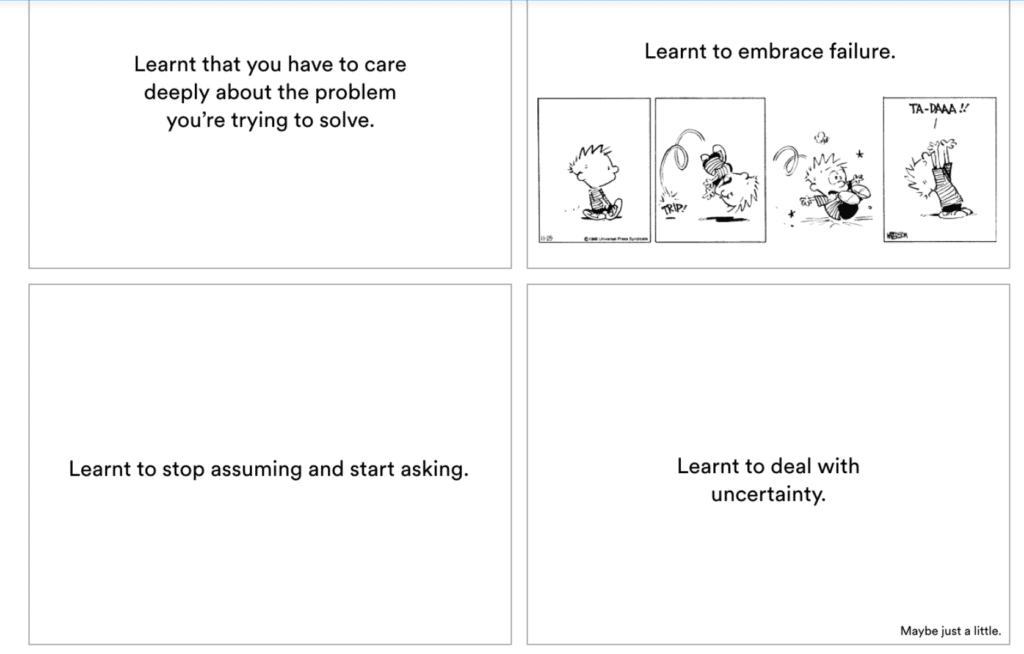 He loves the work and it shows, he created something very original and deeply personal, something that brings joy to millions.

The courage of his convictions towards creating a life that reflected his values and fed his spirit is inspiring.

I don’t read a lot, which is quite embarrassing to admit.

I almost never read fiction, and only very little else.

One book however that has really stuck with me is The Last Lecture by Randy Pausch, a professor at CMU.

He talks about the importance of overcoming obstacles, achieving one’s childhood dreams, enabling others to do so and the life lessons he’s learnt along the way.

He gave a final talk at CMU after he received news that his cancer was terminal.

It’s a video I rewatch every year, it is inspiring to see him share his life story with such profound openness, candour and wit.

In the last 12 months, what new belief, behaviour, or habit has most improved your life?

There was a point last year, very early into starting the business where I would wake up every day with a panic attack about a customer churning, the server going down, candidates rejecting this new way of interviewing, or just about anything related to the business.

Over several conversations in my own head, and with my co-founder and as the company started taking off, I’ve slowly gotten over that.

Actually, I would be pushing it if I said I’ve gotten over it, I’m maybe just a little less paranoid.

Everything related to sales because most of my job these days revolves around that.

Calling customers is probably the most important thing as a business in the early days and I have realized that only recently.

Having grown up in the generation that texts, this was very hard to do, and more so as an introvert.

It was extremely unintuitive because it felt like customers would find this intrusive but turns out that they actually appreciate it.

This shortens the feedback loop from a few days to a few minutes.

I’m still learning most of these things, one day at a time.

I come into the office at a fixed time every day.

Irrespective of how I feel that morning, or whether I slept at 4 AM because I was demoing to a potential customer in the US, I make sure I come in at the same time every day.

This way my schedule for the day is not disrupted.

[callout]To learn more about Adaface, check out their website. You can also reach Deepti via her LinkedIn.[/callout]