If you take out the most recent job ad you can find in the newspapers and compare it with another that was published like 10 years ago, you will notice one glaring thing. 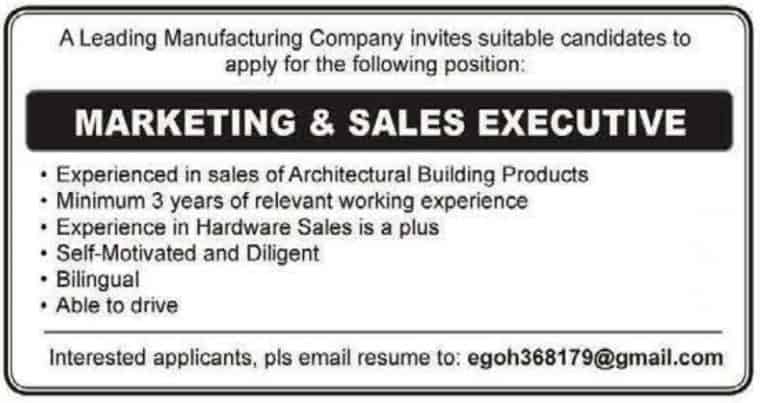 It looks exactly the same.

Over the past decade we have witnessed the migration from desktop to mobile devices, the evolution of traditional to digital advertising and the increasing population of Gen Y workers.

Yet when it come to writing a job advertisement, we still seemed to be stuck in 2005.

And consequentially came along complains about how picky job seekers are and hence not a single applicant.

With an advertisement like the one here, are you expect 200 super performers rushing to the door of your office to see how you apply the same retro methodology to your business?

If not, then please continue reading.

What is wrong with this job ad

“A Leading Manufacturing company”. What can a jobseeker decipher from here? Well, I know it is a company. It manufacture something and it believes it is one of the leading player in the market. That’s it.

Was the company setup yesterday? The Year before? So what does it manufacture? Is it a local company or a MNC? And why are they leading the market?

These are all questions that are running through the head of the jobseekers. With more jobs in the market now, jobseekers will naturally find it a hassle to CSI and find out the answers to these questions.

Research shows that companies that maintain a compelling employment brand have a critical head start when it comes to attracting talent. A 2009 Employer Branding Institute study showed that nearly half (49 percent) of employees cited an employer’s reputation as a major influencer in deciding where to work.

With the prevalence and importance of employer branding, companies can no longer hide behind a veil and think that the job alone can close a sale with a jobseeker. Just like one won’t marry a wife just because she is a women, the same principles apply when it come to jobs.

The position is meant for someone with about 3 years of working experience. Given that it is an executive role, you are probably looking at a Diploma holder who has worked for at least 3 years. Since the product is architectural building related, I’m assuming the industry would be pretty male centric. So your demographics starts from 24 years old to perhaps 28 years old.

And that generation doesn’t read newspaper.

The Nielsen Media Index Report 2013 shows that the print version of ST alone reaches 1.2 million people. This is down from 1.25 million people daily in 2012. Over a year, 50,000 readers have given up reading newspaper.

That is another 50,000 lesser audience your job advertisement could reach out to.

Interesting there is no price reduction despite lesser outreach.

3. Ambiguous phases that can be easily misinterpreted

So you need someone who can drive. To drive a bike or a car? Would that be provided by the company or is it expected that the applicant already has a vehicle?

On bilingualism, I’m assuming English would be one of the required languages. What other languages would be crucial given the norms of this industry?

Where are the important information? Who would I be selling to? How are the market segmented? Do I work in a team? Alone? Reporting to?

There are so many ambiguity in this job advertisement that you don’t even know where to start your assumption from.

Just like a company won’t give extra points to a candidate with email addresses such as [email protected], the sentiment is mutual when a company could at best only muster a free gmail account for job applicants.

A decade ago getting a domain and email probably required a bit more time and effort. That led many companies to opt for an email account by SingNet (remember those?).

But it is so different now. Take a look at the plan by Oryon. You could be paying as little as SGD$120 per year and that include 3 domains and 10 email accounts.

I’m sure a leading company has $120 to spare per year.

5. I can’t find out more about the company

Without a company url/domain, there is simply no way to find out and read more about the company. I probably could do a bit of CSI based on the email address but do I really want to put in that much effort to find out something that the company didn’t think of or probably was too lazy to put in?

In a highly congested space, we are face with so many information and distractions. To make sure what we want to say is being heard, a job advertisement has to be planned and executed carefully so that it could be effective. If not, the cost for an advertisement like this one would caused at least $800 down the drain with nothing to show for.

What you should do instead

1. Identify the unique selling points of your company

This is a part I’m always not seeing. And I can guess why. It appears to hard and time-consuming. But no one can get fantastic results if zero hard work is invested.

And it really isn’t that hard to begin with. You need to firstly remove yourself from your silo and look at the company from a helicopter viewpoint.

There will always be certain key selling points even if you may not think so. E.g.

The benefits of a smaller company could be:

And the benefits of a flat-growth company could be:

Start by asking yourself why are you in this company and what you most like about them. Ask your peers and co-workers the same question. There should be some consistent information that you could refine and turn them into your personalized benefits

Check out this CareerBuilder guide on other aspects you need to take note of in writing an effective job advertisement.

2. Know where your candidates are hanging out

An annual online survey by Deloitte’s Global Technology, Media and Telecommunications revealed that Singaporeans are the most active regional users of instant messaging on smartphones. We also ranked highest globally for smartphone penetration, with nine out of 10 respondents having access to a smartphone.

And Facebook is one of the top app across mobile devices regardless of the OS the device is on. A study by Experian Hitwise examining how much time people living in different countries spend on Facebook revealed that Singaporeans spend the longest on the social network site.

So wouldn’t it make sense to push your ad to Facebook?

That is the premise of Recruit Socially. If the people you need are on social media, then your recruitment should be done there there too.

Self-motivated, diligent, hardworking, meticulous, etc are all compulsory traits. It is on par with turning up for work. Don’t waste space reiterating the obvious. Instead just list down what this person would doing on a daily/weekly/monthly basis.

So in this case, you should be looking at:

This gives the applicant visibility and allow them to self-assess their capability to fulfill and meet these objectives.

4. Be proud of your company

Unless the position is to replace someone who still isn’t aware of what is going on (and prevent him from deleting the entire file server), share your company to your audience. They need to know who they are dealing with, speaking to and how the mission and vision align with theirs.

But before that, employer branding must be in place.

No employer branding in place? Well you are not alone. Until now only bigger corporations have the resource and finance to do this.

But that doesn’t mean it can’t be done on a reasonable budget.

In fact this Employer Branding for Dummies ebook will teach you how to do it from scratch and do it with a shoe-string budget.

Every opportunity to interface with your audience represent a chance to fill that role and move on to other businesses. In today’s context, it also allow you to build up your employer branding savings account.

Stop taking the easy way out and wonder why there are no applicants.

Do it well and be amazed by the good quality applicants streaming through your inbox.