S* was working in a large consulting company after a decade stint in a technology firm where regular check-ins from management are encouraged by the HR department.

Not only is check-ins always forward-looking and how the company can support him, but he could also easily get validations from peers anywhere, anytime with an enabling performance app.

He was expecting the same uplifting approach when he joined the consulting firm but it proved to be the complete opposite.

They are on a traditional annual performance review and barely get to meet his managers.

And every time he did, it became like a job interview to sell his value proposition as his manager nitpicks on what went wrong.

It was emotionally stressful for him that he left after a year.

The annual performance review is a method by which the job performance of an employee is documented and evaluated.

It is conducted annually and mostly a retrospective review of past year results after a course of 12 months.

Usually, it carries measurement items that are applicable across the entire companies and each of them is expected to be completed separately by the employee and the managers over a rating scale (e.g. from 1 to 5)

According to the Randstad Workmonitor Q1 of 2019, 47% of respondents still have regular annual performance reviews.

A huge 88% of them feel that performance review is a one-sided affair that is used by the manager to give them feedback.

The Covid19 situation has only made matters worse.

Given that performance is measured and benchmarked only at the end of each year, most managers gravitate to other optics to keep their team in check on a regular basis.

This means visually checking in your employee at 9 o’clock sharp and a headcount check on who is putting in extra hours when it is time to go home.

Clearly a better and more adaptive performance review process is needed to keep employees accountable, drive their performance and maintain the sanity of traditional managers.

The main grouse about the annual performance review would be its frequency.

Lumping everything good and bad over the span of 12 months and distilling it over a few sittings towards the end is making the scale extremely imbalance, making it a workplace PSLE every single year.

There is also the lag effect – whatever that was formalised at the beginning of the year fails to adapt to what actually evolved over the next 12 months.

New scopes may have been added or even a redesignation.

Given that no one can accurately recall what occurred over the earlier part of the period, it will lead to a ‘recency’ effect as management tended to focus on what their employees had done in the few weeks or months leading up to the evaluation, rather than on what had been done over the duration of the year.

Part of the annual performance review also includes a construct that mandates the force-ranking over employees.

Developed in the mid-80s by then CEO of General Electric Jack Welch, it calls for employees to be distributed across a bell curve where 20% are on top, 70% of them are doing their jobs well but not excelling, and 10% are hurting the company by underperforming and should be fired.

Much as this is heavily credited for the success of GE, it is also the same grading system that crippled Microsoft’s ability to innovate according to a 2012 Vanity Fair report.

When employees became so fixated on outperforming colleagues that they diverted their attention away from what really mattered even if it meant maximizing individual success at the expense of the team.

Benefits of a good performance review

It is unfortunate that many companies are still using such a legacy performance process as there are immense benefits for both employers and employees simply by increasing the frequency of the performance review. 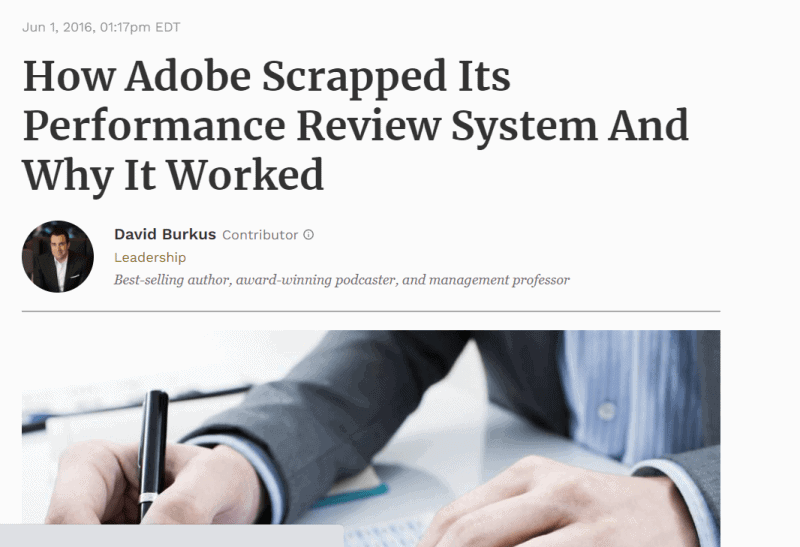 It could lead to a much better understanding of employees strengths and limitations if you see how their performance is progressing over relatively short periods of time.

With this information, the company can design goals that reflect their evolving capabilities or pivot to focus on better projects instead which would lead to satisfied employees and higher productivity.

Regular check-ins also make it easy to compare notes and minimise any form of miscommunications while keeping employees engaged.

Most importantly, it shows that managers care and gives both the time to reassess and reprioritize related responsibilities.

Knowing that the problem with annual performance review is primarily the frequency, it is easy to tackle the problem and consider making that one big exercise into multiple bite-sizes.

Instead of one big session once a year, companies could look into weekly mini sessions that allocate a dedicated period of time for check-ins.

This can be done easily in real-time or remotely. In my previous business, we simply send a questionnaire out every week to stay informed and address issues related to performance, engagement and work culture.

Questions such as learning what is going well in that week, key challenges, any improvement ideas and top priorities for the coming week.

Employees would feel that the goals are much more achievable given the smaller sizes and feel good to fulfil them.

Happier people do a better job, according to a study conducted by the University of Oxford’s Saïd Business School.

Coupled with a quarterly performance snapshot to do a look back on the feedback and conversations that took place over the previous 3 months, both employees and employers can get clarity on performance relative to the quarterly goals, and discuss concerns for the coming quarter.

No more pen and paper

Some may lament that doing weekly and quarterly equates to a lot more paperwork compared to the annual performance review. And it isn’t environmentally friendly either.

Technological innovation in the performance space has also grown in leaps and bounds to help companies better organise and manage their people’s performance.

Performance apps such as Alt Performance would not just digitalise that process but enable regular check-ins, ability to provide real-time feedback with full analytical insights based on proven performance methodologies.

Maximizing the performance of the knowledge worker.

The key to this is still overcoming an archaic mindset that is bent on using industrial age principles to manage the knowledge office.

Management must realise that outcome is a much more valuable currency. A focus on that not just enables better company performance but may help you to achieve a high vanity rating on Glassdoor to help in future talent attraction.

That is a win-win proposition that no company should ignore.