LinkedIn has long been a great tool that has helped connect professionals with one another.

While it’s been proven to be a successful medium for employers to find staff directly, the fact remains that the online platform has mostly catered to white collar professionals.

The thing is, LinkedIn may be a great tool to seek for jobs and employees to hire, but that doesn’t necessarily mean they’re covering all bases.

For one, it’s primarily a web portal – and in Southeast Asia, affording a computer is more often considered a luxury.

LinkedIn may have its own mobile app version, but it still fails to deliver with its clunky interface.

On the other hand, smartphones have become cheaper, and have given people the ability to perform the same tasks they normally would on a computer.

This has become one of the main reasons as to why the adoption rate for computers is shrinking, while the smartphone market continues to grow in double digits every year.

With all these factors, it’s no surprise why blue collar workers in the Southeast Asian region tend to shy away from LinkedIn.

This is where GrabJobs comes in: it’s a minimalistic smartphone app that caters to the service and blue collar industries. 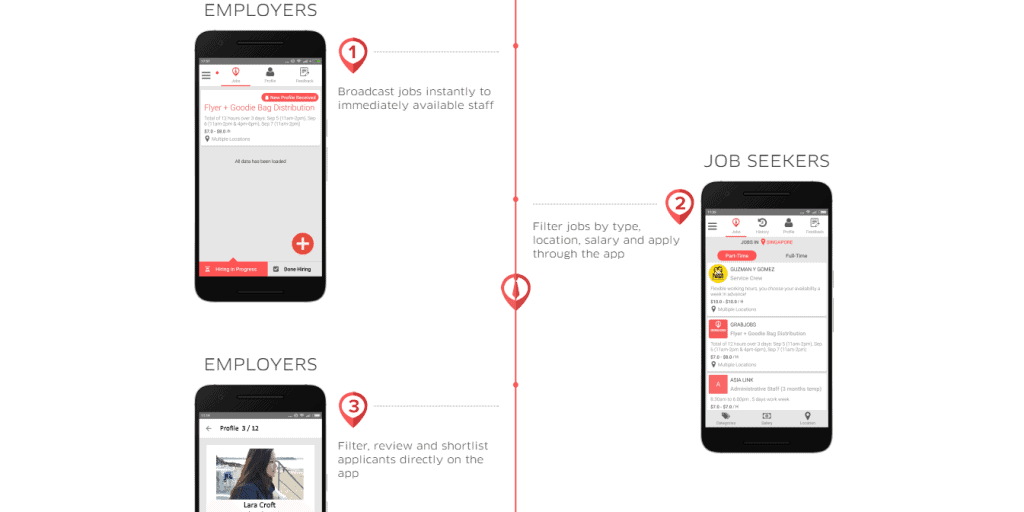 As a matter of fact, GrabJobs didn’t enter the same market to compete with LinkedIn, but rather, to serve what the latter underserves.

With its simple interface, job seekers can easily create a career profile in a matter of a minute and apply to jobs with a single tap.

Meanwhile, employers can also make use of GrabJobs’ chat and search functions to easily and directly connect with job seekers, without having the need to actually post a job ad.

Like any other employer, GrabJobs co-founder Emmanuel Crouy – who has a background in recruitment – knows all too well the frustrations that come with opening and reviewing hundreds of CVs over email.

Even more so, Emmanuel has invested in a number of establishments in the food and beverage industry across Southeast Asia and came up with the idea of GrabJobs after encountering staffing difficulties in his restaurants.

“The objective is to make a super simple app that anybody can use and remove all the time wasted opening emails and CVs” says Emmanuel.

“We are not reinventing the wheel, GrabJobs blends the professional element of Linkedin, the efficiency of Grab and the simplicity of Tinder.”

GrabJobs launched in Singapore in January and just last August in the Philippines.

The company plans to launch in Thailand next week and subsequently in the rest of South East Asia.