In a tight labour market like Singapore, recruiting is tough.

Let alone hiring for roles that are extremely hard to fill.

In a survey by the Association of Executive Search and Leadership Consultants (AESC), the executive roles most in demand this year were predicted to be in technology, analytics and cybersecurity.

One specific area of talent that is in super hot demand these days are Data Scientists.

As every company start making use of data, the roles are opening up much faster than the schools can teach.

Even major banks in Singapore are finding it tough to fill these roles.

Jackie Tan aims to solve that problem with UpLevel:

For the readers who are not familiar, could you give an introduction?

I’m a Jackie-of-all-trades, where I have experience and skills in multiple areas, from biology to fintech to education.

Before my current journey with UpLevel, I was a biology student entrepreneur based in NTU and ran an insurtech startup named fundMyLife.

I enjoy hackathons, and often get invited as mentor and judge for these events.

I strongly believe in paying it forward and occasionally mentor early-stage startups.

What motivated you to start UpLevel?

After the exit of my first company last year, I was teaching Python and data science for while in a coding academy where I served as instructor and Chief Academic Officer.

There, I saw how there was a gap between what the students learned and what was required in a job setting.

After leaving the coding academy, I decided to start UpLevel where we co-design project-based data science training.

I was also inspired by my own journey in life where my skills were honed through practice and projects.

How exactly does UpLevel work?

On the B2B side, we have a train-to-hire model where we work with companies hiring for data roles to design training projects that can be executed in 6 – 8 weeks.

We then look for candidates from our pool of students who can fulfill those roles and train them over that period.

This reduces hiring time by 2x for companies and since we charge a flat fee for the training it’s 2x cheaper as well. This helps candidates get access to potential jobs with companies.

On the B2C side, we offer standalone project-based data science training.

These students are grouped into teams of 2 or 3 people and trained remotely to execute a data project.

These standalone projects help learners build confidence and contextualize the skills that they have.

Currently, we’re mostly self-funded and we’ve had a bit of help from the Startup SG Founder grant by SPRING.

We’re also bootstrapping using the revenue that came from our business activities.

Competitors-wise, we are competing with recruitment agencies and coding bootcamps that help their graduates find employment in companies.

General Assembly comes up often in my conversations with people since they too do both education and placements with their partner companies.

That said, we’re a mix between education and placement, and it has put us in a nice niche space.

We don’t train people from scratch like bootcamps – we take individuals with existing skills and we train them from good to great.

Who is your biggest customer?

Our biggest customer so far is a regional e-commerce company headquartered in Singapore.

They were exploring the use of predictive modelling and were looking to build their data science team.

Before this, most of their insights came from business intelligence tools.

As such, they wanted to move from descriptive analytics into predictive analytics using the huge amount of data they had in their servers.

What has worked well for you in marketing UpLevel?

We find that content marketing is good as it catches leads’ attention organically. 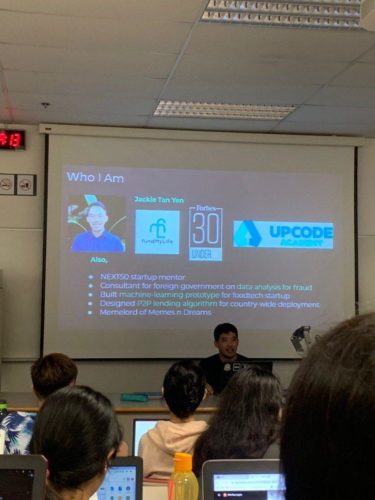 We’ve been lucky that we have organic inquiries and referrals from friends in our network.

What is your proudest moment in the history of UpLevel?

On the B2C side, I am proud when my students have a “aha” moment which leads to brilliant ideas and code.

It’s important to teach people how to fish on their own, rather than fishing for them.

For my B2B side of the business, I was the proudest when the CEO thanked us for doing a good job on not just training promising data science candidates for the company, but also prototyping a data product that the company has never seen before.

We’re a pretty young startup, so I’m looking forward to more of these moments.

Compared to my first startup, it took significantly less time to get revenue for starters.

I had a hard time in my first startup because we built before we completely validated our idea, but in the second time it was easier because we not only validated the idea and got customers first but also prototype our product quickly.

It was also easier to reflect on my vision and mission for the company as our north star so that my co-founder and I know exactly where to head towards.

Do you have anyone that is a major professional influence?

At the risk of sounding cliched, the first person is Anthony Tan of Grab.

What started out as a ride-hailing app became a multi-vertical regional force.

I like the idea of starting out in one service, dominating it and then expanding across different related services.

It’s influenced how I think about UpLevel, and I am inspired to do the same in the technical education space.

A second person that influences me greatly is Roy Lai of InfoCorp Technologies.

He implemented FAST in Singapore and subsequently started a fintech company that empowers the unbanked in SEA.

I am influenced by how he approaches his business via partnership and always thinks about strategically placing himself in the value chain through win-win partnerships. I

It’s influenced how I work in UpLevel – it is partnership focused, especially with so many players in the tech education space.

Two books have informed my perspective on intellectual disciplines and have influenced my thinking strongly – Consilience: The Unity of Knowledge by E.O. Wilson, and The Two Cultures by C.P. Snow.

Keeping these two problems in mind has informed most of how I approach problems, be it professional or personal. I prefer an integrative approach, involving multiple stakeholders and prefer that everyone involved gets something positive out of a deal.

An area that requires a huge improvement is conducting B2B sales, from lead generation to closing – I’ve messed up so many times it’s frustrating.

To work on that, I’ve enlisted the help of a friend of mine as a company advisor to guide me on that aspect.

I have several weaknesses, and generally I look to experts to help me improve.

Given that I write a lot, be it code or articles, I found that having a second monitor vertically positioned helps a lot in my productivity.

It’s so much easier see documents and I don’t need to scroll often to read or edit things.

What a gamechanger – I highly recommend it to everyone.

[callout]Keen to learn more about UpLevel or Jackie?