And it was my first time flying Silkair too. I realized they don’t have the TV screen that SQ has. Darn it! No movies to watch and Super Marios to play.

It is also the first time I travelled with my friend and financial advisor Eugene. He was the one who suggested Cebu after writing off Japan, Myanmar, China, Thailand, India due to a variety of reasons.

When I said Cebu, what I really meant was Moalboal. It is a small town (or municipal as they like to call it) at the southwest corner of the huge Cebu island. It is usually frequented by divers. Unfortunately for Eugene I don’t have a diving license so he can’t spend much time with the fishes.

We were fortunate to have our football buddy’s friend pick us up at the airport. The flight took two hours longer as it was a transit flight (my first again) and we reached Cebu airport probably a quarter to 3pm.

It was then that I learned how big Cebu is. I had the impression it is probably as big as Phuket.

The truck ride took us another 4 hours! I hate to spend too much time on transit when I’m traveling. It was made worse that the truck has very opaque anti-sun film. You can’t see much outside without rolling down the window. It was a bit like sitting in a 3D simulator for 4 hours but most of your view is blocked by the driver.

After losing the way a couple of times, we finally made it to the resort at about 7pm. The reception has closed and check-in couldn’t be done. Luckily the security has our key. We drop off our stuffs and had some horrible resort dinner before heading for bed.

Don’t ever order their garlic fried rice. It is really more like baked garlic rice with no salt. 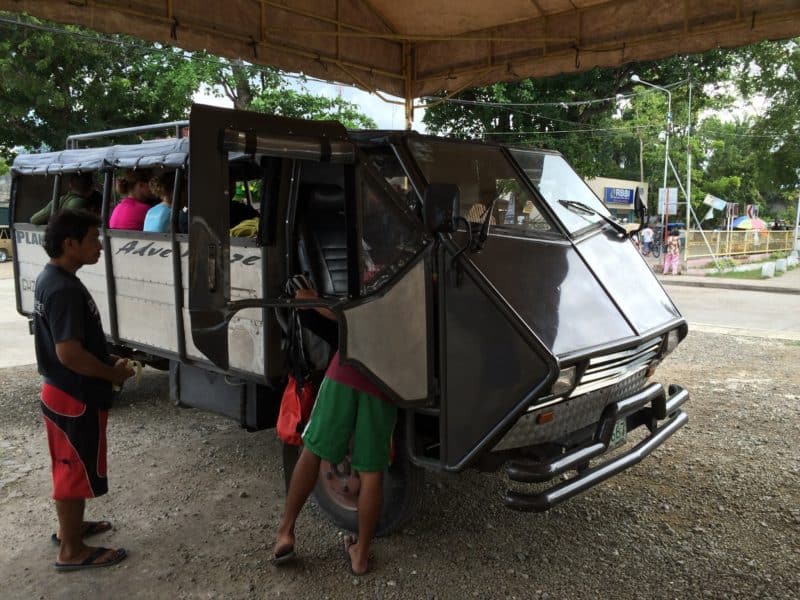 Our first (and only) adventure begins the next day with Canyoning. It is climbing up a few hills over 45mins and coming down via the canyons. Because they could be really steep, we had to rappel down no less than 3 times. And while you try to figure the rope system and cling on for your life, the wind blows you from side to side and the gushing water make sure it’s more fun to fear when you are drenched. And did I mention that these are attempted over heights of 100m to 200m, with the last rappelling done almost in mid-air!

But to me the fear really kicked in when we have to leap from a few canyons straight into the deep water.

I was born with a fear of heights and it felt no different from jumping into volcano. But I survived to write this blog – and I sort of conquer my fear I guess.

The 2.5 hours long experience ended with a warm rejuvenating hot spring soak at base camp before we make our way to the excellent BBQ food that our guide prepared over charcoal and wood.