Do you dream of starting the next Zopim or Razer?

And there are so many other different success stories coming to you from every corner of the media every single day.

Entrepreneurs are becoming millionaires by the day.

At every Startup event I go to, you can see hundreds of aspiring entrepreneurs who wish to emulate the success that they read about.

However most of them don’t get to hear about the reality of what business ownership is like for 99.99 percent of those who start a new business.

Fortunately there is a new movement that is gaining huge traction globally. It’s the FuckUp Night and I was one of the four speakers over the 2nd run, sharing about our business failures and what we learned from them.

For anyone that didn’t get to attend, let me touch on seven common myths about entrepreneurship that you need to know before you get started

That depends on your definition of fun. If working more than  70 hours work week, taking on multiple roles simultaneously (from doing a client presentation to washing the toilet) and getting thousands of rejection in your face sounds fun, then this is probably for you. Most of the time it isn’t going to be fun.

Your path to realizing your passion will lead you through

Myth 2: I’ll be my own boss and reports to no one.

That’s about right. Instead of an employer telling you what you need to do, it will be replaced by many others such as your customers, vendors, regulators, government bodies and sometime even your employees. 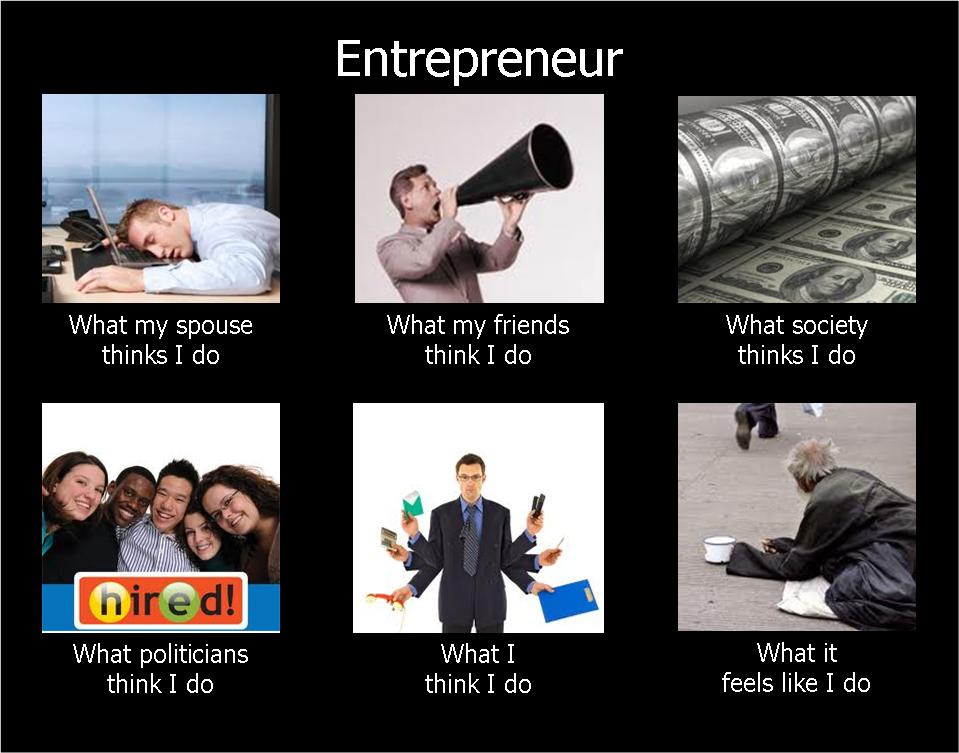 You can try to be your own emperor but given how easy it is to be disrupted by newcomers, you won’t get to enjoy your emperor-ship for long.

This is for sure because you will have to work much harder since you not just want it but need it to succeed.

And it is natural to want to be involved in every strands and fiber of your business so you can thoroughly understand how it function and how best to bring it to the next stage.

Elon Musk attributes his success to the 100 hours he puts in a week. If he takes the weekend off, that is 20 hours per week day – leaving you with 4 hours to eat, shit and sleep.

Myth 4: I can control my schedule.

The thrilling thing about running a business is because it is so unpredictable.

But because of that, and especially if you are new to it, you would be fire fighting most of the time. And chances are there are more fires than fire fighters.

Even if things are peaceful and serene, you will want to find new things to do to expedite the growth of your new business.

Myth 5: I will instantly make lots of money.

Before the founders of Zopim made it, they were drawing $500 per month.

My first pay cheque was $250 and it came after the first year.

When you are making money, you would want to double down and reinvest your profit. And if that didn’t turn out well, you probably would have incurred many expenses that you need to service.

Leaving very little money to give yourself an increment or a bonus.

Even once the business is up and running, entrepreneurs probably are not making the fat dough everyone think they are. A study from American Express in 2013 shows that the average salary of the entrepreneur was $68,000. SimplyHired pegs the annual income of an entrepreneur at $111,000.

It might sound nice to many but not enough to make that Ferrari affordable. Conversely some government scholars or fresh MBAs are getting way more right after their graduation.

My business was started with less than $24k of capital. I know fellow entrepreneurs who started with much lesser and is now running a cabling business with 120 headcounts. This was during the era when the term Seed probably is alluding to gardening.

But even today, it is entirely possible to bootstrap your way to success. GoPro is one famous example. They are now a publicly traded company with an IPO value of $2.95 billion.

The current context allow anyone to do up a Minimum Viable Product and test the market. Some people even do lesser and simply put up a landing page. If it hits subscribers target, maybe one should go ahead.

Entrepreneurs quit all the time.

If you know what you started is crappy, you move out of it and move on.

Before Bill Gates introduce us to Microsoft and became the world’s richest mane, he was involved in a company that process and analyze data from roadway traffic counters. The company Traf-O-Data shut down before the project even got rolled out.

Remember this entrepreneurial mantra: “The day I quit is the day before I succeed.”